•S2EP3 AN INTERVIEW WITH ANNA• 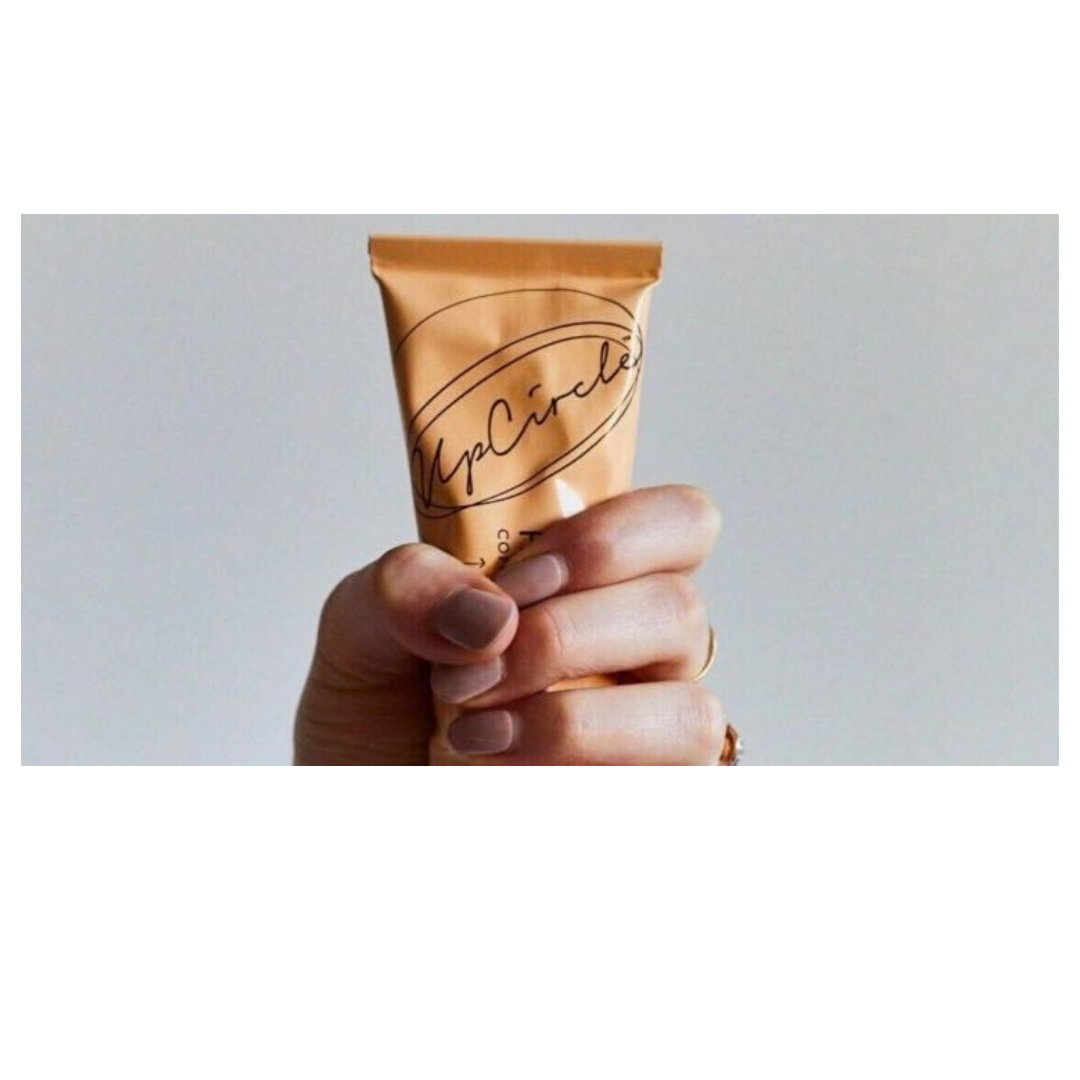 We got the chance to interview the wonderful Anna Brightman, co-founder of UpCircle. UpCircle is a beauty brand focused on up-cycling waste produce from various industries and using this as the base ingredient for a variety of skin and body care products.

Up-cycling is something that really resonates with us as we use up-cycled ingredients in a number of our products. The concept of taking something that would otherwise be thrown away is the true definition of sustainability within beauty supply chains and a great example of a circular economy. We were super excited to hear more from Anna…

Dominika: Hi Anna! Please tell us more about the UpCircle story. We first came across you doing your hand scrub demos at a conference in Olympia back in 2015 or 2016!

Anna: UpCircle started about just over three years ago now. The initial idea came from my brother William, who is the co-founder. What he wanted to do was form a business inspired by saving coffee waste. He used to work in finance and on the way to work every morning you see hundreds of people with the coffee cups walking along with their coffee and just buy out of pure curiosity, he asked his local coffee shop ‘What do you guys do with all of the waste?’. He was shocked to find out that they produce so much that they have to pay the council to have it removed to landfill. When people think about starting a business, you often hear the whole problem versus solution analogy. That was what this all started with. We looked into what happens with coffee at the end of its life and found that it has a slightly unknown negative environmental impact. When coffee shops are disposing of it in vast quantities, it rots and produces extra methane which has a negative environmental impact. William wanted to start a business that dealt with that issue. As for me, as a teenager, I wanted to be a makeup artist and I have always had a keen interest in skincare and ingredients.

Elsie: What was it like when you started up, did William just ask you to quit your job one day and that was that?

Anna: Pretty much! I used to work as an area manager for a supermarket, I was managing multiple stores and I loved the job. It was crazy and it was an incredible experience, I had hundreds of staff and I had a huge amount of responsibility. But working in retail wasn’t really my life ambition and given how much I was having to put into it, I wasn’t sure that I was getting enough out of it. I had a company car and a decent pay-check. But it just wasn’t fulfilling.

Elsie and Dom: Do you enjoy working with your brother?

Anna: As anyone with siblings can relate, it’s a challenge; it’s both brilliant and awful at the same time. I think that the reason that we’ve managed to grow so quickly is because we can cut through so much of the politeness. I think we both acknowledged that he wouldn’t have been able to do it without my input and there’s absolutely no way I could do it without him. His financial background is key.

Elsie and Dominika: Talk to us about the ingredients. Obviously the up-cycled ingredients is such a core element of your brand. Could you explain a bit about the up-cycling process?

Anna: The first ingredient that we worked with was coffee. We collected the coffee grounds from a whole host of small chain and independent coffee shops all over London. We do daily collections and then the products are made the next day. After that we moved onto chai tea spices. The story behind that was that we were at a consumer show and a guy came up to us who runs a chai tea company. He said ‘I brew through this gorgeous mixture of 10 spices at least three or four times a week; once the water is boiled through there’s no more use for them, but they smell amazing. Do you want to take a batch and see what you might be able to do with them?’. We did and we dried them out, then grind them down, and use them as natural soap fragrance.

Following that, our most recent products were made with powdered fruit stones that are the byproduct of making fruit oils. The main skincare benefits of those are that they’re very high in antioxidants. They also give this gorgeous creamy texture and all of them are high in vitamins.

Elsie and Dominika: How does your NPD process work? Do you find the ingredient and then build around that? Or do you start with the product idea?

Anna: I would generally say it comes from the ingredients first. Because of who we are as a brand, the ingredient has to come first. Usually we’ve got this ingredient that we can work with and think about how we are going to make a great product around that. We are currently looking into things like lip balms or body moisturiser.

Elsie and Dominika: Let’s talk about the business perspective of things. You started three years ago, did you self fund that initially? Seeing you on Dragon’s Den was amazing!

Anna: We started off with the Virgin startup loan, which was modest. We used it to afford our first packaging round, because one of the biggest struggles in the very early days was minimum order quantities when it comes to things like packaging.  What comes with working with Virgin is a lot of like mentorship as well.

Other than that, a lot of it was self funded in the early days. My brother and I both put in a lot of our savings, and some other friends and family as well. Then about a year in, we did a crowdfunding round where we raised just over £210,000 which was put towards our rebrand (from OPTIAT to UpCircle). The rebrand was a decision to refine our idea. We had the exact same concept and actually the exact same products, the scrubs stayed completely the same, but we basically switched up the branding.

Dragon’s den came during our rebrand. But it’s nothing like what you see on TV, it is very intimidating, we were lucky to get the full 15 minutes which most people don’t get. But essentially we were in front of them for 3 hours getting absolutely grilled! My brother and I agreed that he would answer the questions regarding financials and that I would answer the questions relating to branding or product.

Elsie and Dominika: What kind of questions were they asking?

Anna: Every single question that you could think of, that was finance related.

As you can imagine that was a very daunting experience. But extremely enriching, as not only could you end up with financial backing and mentorship, but if you make it to TV there is a lot of exposure.

Anna: I was on a panel a couple of weeks ago with the founder of Dame, who made the sustainable tampon applicators and she had also gone on The Den. It was interesting hearing from her that they only got like a two minute snippet; they talked about how it was the female dragons mainly interacting.

Dominika: How did it boost your brand? Do you feel like it was worth it?

A lot of people actually discovered us from Dragon’s Den and we had a huge influx of orders and brand awareness. We may crowdfund again but it’s not on our horizon at the moment, right now we are happy with our current investors.

We shook hands on the deal on air, then obviously the due diligence process happened and we had long discussions in their offices with the team. But I think for us it became apparent that it wasn’t something for us at that stage. But for the amount of money that they were asking for, particularly given the funding wasn’t an issue at this point because we had just done our crowd fund. We didn’t think that they were going to be able to bring enough to us to justify the amount of money that was, that was being given up or the percentage.

Elsie: Tell us a bit about your distribution?

Anna: The first big retailer to take us on post rebrand was boots. We’re also with Holland and Barrett, Revital, Whole Foods and a major win from last year was Sainsbury’s. That was a big one because one of the things that we’ve always maintained was keeping our price point as attractive as possible. I think that in the past, sustainable products had been something for the elite, we were very keen to make sure that our brand was going to be accessible to all.

Elsie: We say this all the time, you can pretty much get into any retailer if you’ve got a good pitch, if you’re from a sales background and if your product is good. The hard bit is the sell-through, which is particularly challenging with an organization, like Boots who are still coming to terms with working with smaller businesses.

Anna: I think a big challenge for small brands is being able to tell your brand story and being placed on the right shelves with other brands that are relevant to your own.

Elsie and Dominika: What is your favourite product of the range and what’s the best seller?

Anna: My favourite product at the moment is our cleansing face balm. We launched it just before Christmas and I’m just so thrilled. It’s been so well received and I’m thrilled about that. It’s made from the powder of discarded apricot stones and has this gorgeous texture.

Our bestseller was the citrus face scrub, but at the moment it is our face serum. It’s an organic serum. It’s got the coffee oil from the grounds, which has obviously got caffeine content, so really good for reducing puffiness under eye circles and generally brightening up your complexion. We then blend it with a gorgeous mix of oils.

Elsie and Dominika: What’s 2020 got in store for you guys?

Anna: We are looking forward to expanding our team and bringing some people in. The first role we are looking for is someone in marketing and that person has to be able to tell our story.

We will also be going into America! We just launched with two retailers out there, Credo and Ulta.

•S2EP3 AN INTERVIEW WITH ANNA •